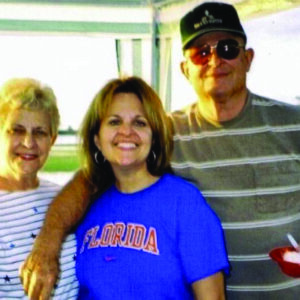 Published in the Dunndeal Gazettes, December 2021.

Tracy Serdynski Stites and her family never imagined that they would be starting a foundation that would make such an impact on hospital patients, their loved ones, and even the doctors and nurses who care for the patients.

It all began in July 2020. Her father, Don Serdynski, was developing flu like symptoms and went to the hospital. It was determined that he had COVID, and due to restrictions, other family members were not allowed in. Before long, his conditioned worsened. He was placed on a ventilator, which made him unable to communicate with his family as well as the doctors and nurses caring for him.

The only means of communication the family had was through the nurses. Each time a call came in through the nurse’s station, a nurse would put on the protective gear to enter the room and hold the phone up to their father’s ear so he could hear their voices. The nurses were doing this for each of their patients. This placed a great deal of burden on the already overworked staff as they had hundreds of patients at the time.

Her father was not getting better as they had prayed, but God blessed them in another way. Their family was allowed to visit their father during the last five days of his life, in a COVID ward in his COVID isolation room.

“This was definitely a God thing, because in the past, we could only see him through a glass window,” said Tracy.

One day when Tracy was getting ready to visit her father, she gathered family photos to place in her father’s room so that when he opened his eyes, he would know they had been there and enjoy the memories of family trips, his mammoth sunflowers that he loved to grow, and watching the Florida Gators, his favorite football team. She also wrote a note to the nurses asking them to call a family member whenever they were in the room so that the nurse could call when it was convenient. This would alleviate the extra time each nurse took to put on the gear and go into the patient’s room, since he or she was already in the room performing his/her routine duties.

As a citrus grower for most of his life, Don Serdynski was very healthy before COVID struck, and they never imagined that he would be taken from them so soon. In the last few days of his life, when hospice took over, one of the workers mentioned that she didn’t know of any other family that was able to spend time with their loved one suffering from COVID. Tracy knew it was God’s blessing on them.

Knowing that the nurses were overworked and extremely tired, Tracy asked what they could do to help them. Reducing the number of calls to the nurse’s station was one request and the second was how much they enjoyed looking at the pictures. It helped them to connect to her father more. They missed that personal connection and wished that other patients had pictures in their room.

“It’s a refreshing look into who someone is when they can’t speak,” one nurse said.

On his last night on earth, Don was being taken care of by Tim Lanier, a nurse, who is also a big Gators fan. Tim called Don’s family using the phone number in the room to let them know he was passing. When Tim realized they would not make it in time, he took Don’s hand and said “I am not going to let a fellow Gator die alone. I will stay with you until the end.” Because of the photos in the room, Tim was able to talk to talk to Don about his family, his flowers and Florida Gator Football until Don went home to be with the Lord.

In her grief, Tracy asked God ‘what can we do to help the doctors and nurses and other people going through this tragic time?’

“God spoke to me and said it’s the phone number and the pictures in the room.”

That’s when she came up with the idea to make a Patient Kit. Through Advent Health, they were able to create patient support kits and “Who I Am Foundation” came into fruition. The kits consist of hospital grade plastic photo pages with pockets that can be used for pictures, notes, and family contact information.

The patient support kits are also used by families with special needs children and in nursing homes for their dementia patients.

For more information on the organization or to find out how you can help, go to https://www.whoiamfoundation.com. High school students can volunteer and earn hours towards their Bright Future Scholarship.